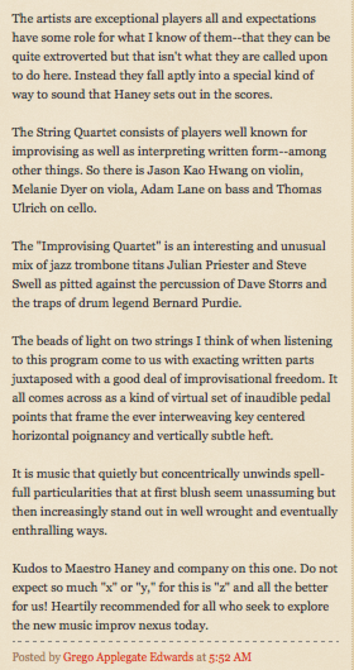 “Mr. Haney is a pianist drawn to experimental settings, and he creates a promising one here.” The New York Times

“One of the most inventive pianists in the USA...” Bruce Lee Gallanter, Downtown Music Gallery

"...has played inside and out :from Bud Shank to John Tchicai" The Village Voice

"A bright light on the modern jazz scene. A serious and interesting young man on the leading edge of jazz composition." Judy Hamill, CBC Radio

"Haney is worth your time." Jason Bivens, Cadence Jazz and Blues Journal

"Pianist David Haney seems to get off most on....collective improvisations rooted in the moment." Derk Richardson, San Francisco Bay Guardian

"Haney's minimalistic approach, which is primarily rhythmic, veers away from any melodic content, and produces some wonderful interplay through his unaccompanied solos, especially with the relentless beats of Bennink. The percussive rhythmic interplay with Bennink is often reminiscent of Hasaan Ibn Ali and Max Roach's classic session from 1963, (The Max Roach Trio Featuring the Legendary Hasaan)." Laurence Donohue-Greene, One Final Note

"He challenges Bud Shank and other first string collaborators he brings together (including, in the past, Han Bennink and Julian Priester) with his instant compositions that mix the kinetic energy of music-in-the-moment with harmonic structural touchstones." Bill Smith, Willamette Week

"Although there are some hints of blues and swing, the sound speaks more to the classical. Haney has successfully blended these forms in energetic and intelligent pieces. Paula Payerman, Fast Forward Weekly

"...a welcome invitation to grab your passport and be swept away on a journey. The music transported you into uncharted, yet familiar mindscapes. And what places they were!" Diane Worley, Jazz Notes 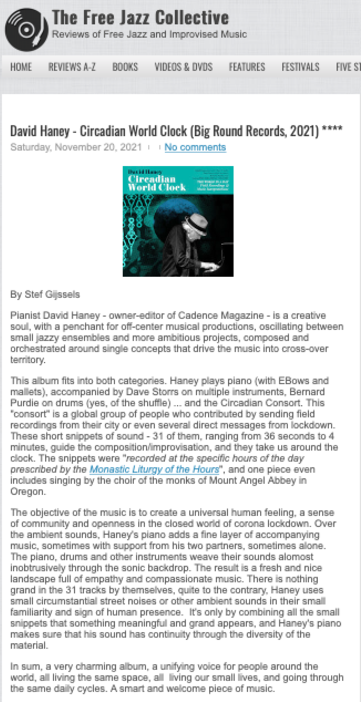 Listen to over 10 hours of released and unreleased David Haney music on GIVE THE DRUMMER Radio - WFMU.org

Projects in development
Face of a Thousand Hymns- album

DAVID HANEY studied composition for six years with Czech composer, Tomas Svoboda. After several years of working with the Society of Oregon Composers, Haney began applying  his skills as a working jazz artist, often paired up with some of the greatest minds in jazz improvisation, such featured artists as Andrew Cyrille, Roswell Rudd, John Tchicai, Bud Shank, Bernard Purdie, Buell Neidlinger, Julian Priester, Han Bennink, Obo Addy, Wilbert de Joode, Gerry Hemingway, Wolter Weirbos, Perry Robinson, and Johannes Bauer. Haney has recorded 15 albums in ten years for C.I.M.P. Records and Cadence Jazz Records. David has also collaborated on 14 albums on other labels worldwide. He has received grants and commissions for his creative work from the U.S. State Department; Alberta Film Works; and the Oregon Ballet Theatre. Haney was awarded a travel grant from the U.S. State Department to present the music of composer Herbie Nichols in concerts throughout Argentina and Chile. Haney's piano/trombone work Ota Benga of the Batwa was included in the critics pick for best Jazz Album of 2007 (Coda Magazine). “Conspiracy a go go" and "Clandestine" were both selected Top Ten Jazz Albums of 2009 (Cadence Magazine). David’s next release “Solo” received top ten honors in 2014 (Cadence Magazine). The Penguin Guide to Jazz has a half page entry on several David Haney albums.