I’m Laura Ainsworth, and I was born in Los Angeles, but grew up in the Dallas area, which is still my base.  You can also find me at www.lauraainsworth.com or on Facebook (http://www.facebook.com/LauraAinsworthSings) and Twitter (@LauraAinsworth1).

2.     Background, were your parents musical?

Incredibly! My grandmother was the pianist in an all-female ragtime jazz band.  My late father, Billy Ainsworth, was a “musicians’ musician,” a very highly-regarded sax/clarinet player and arranger in the music and jingle industries.  He was a prodigy who dropped out of college after he wangled an audition for Tommy Dorsey at 17 and was hired on the spot.  He played with major bandleaders such as Ray McKinley and Tex Beneke before he was out of his teens. Later, he played with Freddy Martin’s band and the Ernie Felice Quartet, pioneers of cocktail jazz and accordion jazz. He was also a terrific singer and sang with Ernie’s harmony vocal group, The Hi-Fi’s.

You can read more about him here: https://www.jazzwax.com/2018/06/billy-ainsworth-and-the-bands.html

3.     How did you learn music and what are your early memories?

I have studied music and sung since I was a child, through high school choir, college theater training and roles in many musical shows, all before becoming a solo vocalist.  But my #1 influence was my late dad. I came along well after the big band days ended. He was working in Dallas by then, recording production music and leading a top jingle singing group by day, and playing in showrooms by night. He would sometimes take me to the studios, where he insured that every note and harmony was spot-on perfect (his nickname in the jingle business was “The Judge.”) Those great harmony singers were like aunts and uncles to me.

At the Fairmont Venetian Room, the band’s families got in free on Tuesdays (a slow night.) My mother would take me to see Daddy backing legends like Tony Bennett, Mel Torme, Marilyn McCoo and a very old but still amazing Ella Fitzgerald.  And of course, I grew up hearing his record collection of what he considered the best singers in the business, many of whom he’d worked with; some famous like Steve and Eydie, and some obscure. You can hear his influence in everything I record. Thanks to him, I also grew up hearing the very best harmony singers, from Manhattan Transfer to the Swingle Singers (which drove my mom a little crazy!)

My husband and I bought and restored the 1955 house where I grew up. I even have the same Formica kitchen table where my dad used to write arrangements (his former bandmates recall that he could write brilliant arrangements in his head, anywhere, even sitting in a car at a stoplight.) I also have the perfectly-preserved green tile bathroom where he would practice his sax by the open window, filling our neighborhood with gorgeous music, like the jazz soundtrack in a cool black-and-white movie.

4.     Recall a turning point in your life, either musically or personally.

One of the most important was studying voice with Dr. Sam Germany, head of the music department at Cedar Valley College in Dallas. I had sung all my life, but my father was a self-taught prodigy who discouraged formal lessons, fearing that I would be molded into a “legit” sound, like a church soprano. But I learned that a great teacher could help me achieve the sound I wanted, even a retro lounge-jazz sound.

Another very important turning point was working with my friend Brian Piper on the first live solo show I created.  Brian is a genius pianist/arranger, the accompanist whom all the top touring artists and Broadway shows hire when they come to Dallas. I was honored that he wanted to work with me.  He later played on, arranged and produced my first indie CD, “Keep It To Yourself,” another major turning point for me, and he’s been my partner on all my recordings since. I think we’ve created a unique sound together, classic but fresh, inspired by the past but not just a slavish reproduction. And we both inherited perfect pitch from our musician dads, so there are NO off-notes on anything I release. No Auto-tune required!

5.     What was the first musical project that you were really excited about?

I’ve been excited about everything I’ve done, but probably the most exciting was my debut CD, “Keep It To Yourself.” I love doing live shows, but it was always depressing when they were over and gone forever. So my husband and I formed our own label, Eclectus Records, and learned how to produce, press, release and promote a CD. I just wanted to create something permanent; I didn’t know if anyone would actually listen to it. We sent it out into the world like a message in a bottle. I was honestly shocked when it got rave reviews and airplay around the world. I still hear from fans in France, Japan and other countries who are just now discovering it.  That’s amazing to me. It really made me want to record more!

I now have two other CDs, “Necessary Evil” (inspired by film noir) and “New Vintage,” which has scored a number of indie music awards and nominations. We also put out a longtime dream project, a 180-gram vinyl best-of LP, “Top Shelf.” I’m finally on the medium of my idols!

6.     Who are your musical heroes and which albums are you excited about?

I love many of the great jazz/lounge/big band singers of the ‘20s-‘60s.  Ella is my all-time idol (the “Songbooks” are my Bible), but I also love Julie London, Peggy Lee, Keely Smith…early Doris Day (with Les Brown), Rosemary Clooney, Dinah Shore (“Dinah Sings, Previn Plays”) and Sarah Vaughn (“After Hours” is a favorite.)  And others most people today have never heard of, like Alice Babs. Many male singers, too: Sinatra, Tony Bennett, Fats Waller, Mel Torme, and especially my favorite, Nat King Cole.  My vocal style has been compared to Jo Stafford, which I can see a little, although my range is deeper. And I love to revive songs by great singers who deserve to be better known today, like Annette Hanshaw and Bea Wain.  Whenever I rediscover one of these wonderful artists from decades ago, it makes me want to record all the more.

As for albums, my husband is a record collector and music historian, so we have a house bursting with thousands of albums that I mine for overlooked gems to add to the Great American Songbook, like “That’s How I Got My Start.” It’s an early Frank Loesser tune that hadn’t been recorded since the ‘40s. It leads off “New Vintage.” We did a noir-ish video for it that won an Artists Music Guild Award.

Among contemporary artists in my field of vintage-influenced lounge jazz, there are many I enjoy. But I especially love those who don’t just replicate the sounds of the past (who can improve on Frank or Ella?) or cut the same handful of standards over and over, but like me, try to shake things up a bit to bring this sophisticated music into the 21st century.  For instance, I loved Kyle Riabko’s recent album, “Richard Rodgers Revisited.” My friend Glenn Crytzer just put out a fantastic Christmas album with his ‘20s/’30s New York City big band that features new songs that sound like forgotten old songs, recorded with period-correct mic placement so that the mix sounds like 78s of that era, only in modern studio sound quality.

I also appreciate current female singers who have their own distinctive sound, just as the big recording stars of yesterday did, instead of copying that same Billie Holiday-derived sound that many of today's retro-style singers tend to fall into. Yes, Billie is iconic, but that doesn't mean all girl singers of standards have to sound like her – or like a homogenized version of her that never really existed.

And of course, if Seth MacFarlane ever wants a duet partner, he can reach me anytime.

I try to find strong songs with memorable melodies and well-crafted lyrics that fit my style (sort of femme fatale, but with a humorous wink), and that have not been done to death. There are so many great obscure songs of the 1920s-early ‘60s that deserve to be rediscovered, so I’m doing my public service by introducing them to a new generation.

I was thrilled recently when a young musical performer in New York contacted me to ask about using “That’s The Kind of Guy I Dream Of” from “Keep It To Yourself” as an audition song. I found that on the B-side of a Betty Hutton 45, where it was a blasting novelty song, and thought it could be turned into a great swinging jazz tune. I later discovered it was written by the Soft Winds (Herb Ellis, Lou Carter and John Frigo) and was cut by only one other artist, but the label didn’t release it for decades. I was thrilled to learn that the only other person who recognized its jazzy potential was Nat King Cole.

I also look for those rare new songs that can stand alongside the standards in style and quality, like “Keep It To Yourself,” or “Last Train to Mercerville” from “Necessary Evil.” I’ve always written, not only serious songs but commercial jingles, industrial shows and many parody songs that have been played on radio without credit – that was my “day job” for a long time. But I only recently recorded one of my serious originals for the first time, “The Man I Love Is Gone” on “New Vintage,” written with my jazz guitarist friend, George Gagliardi. It scored a few indie award nominations, but the biggest honor is when someone mistakes it for an overlooked ballad from the late 1940s.

If I do record a standard, I try to find a fresh way to do it. Like the exotic world jazz arrangement of “Out of The World” on “Necessary Evil,” or the after-midnight, bass-driven “Love For Sale” on “Keep It To Yourself.” That same CD features “Skylark” with just my vocal and jazz guitar by the wonderful Chris DeRose-Chiffolo.  We cut that live in the studio in a single take. I wanted to strip away decades of fluffy arrangement cliches and focus on the raw emotion of that great Johnny Mercer lyric.

Currently, I am working with a producer friend in L.A., David Gasten, who is rereleasing classic midcentury lounge jazz and recording the new wave of artists like me who are bringing back vintage sounds with new twists.  He’s been working on getting my music into Japan, where there’s an eager audience for old school American jazz.  The Disc Union chain is now carrying my “Top Shelf” LP, and Ratspack Records will soon be distributing all three of my CDs across Japan.  It helps that I’ve gotten some terrific reviews and feature articles in several Japanese jazz magazines.

9.  What’s next, what are your upcoming projects?

I’m actually working on two new albums.  One is a full-scale follow-up to “New Vintage” on the theme of time traveling, again with Brian Piper and my band of great North Texas jazz musicians (people don’t realize how amazing the players are here, but many come out of the legendary University of North Texas jazz program, founded by the late Leon Breeden, a frequent bandmate and close friend of my dad’s.)

For the other album, I want to get my players together in the studio and do a quick, “after hours party”-style recording of some of the better-known standards people keep requesting that I record, but I never have (plus a couple of unusual requests I’ve only performed live.) I’m thinking of calling it, “Well, You Asked For It!”

And with any luck, I hope to be invited to perform in Tokyo and become “big in Japan!” 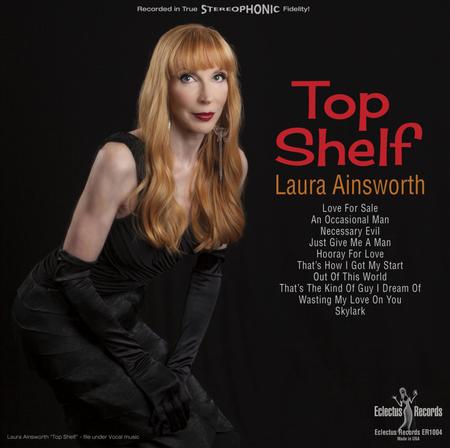