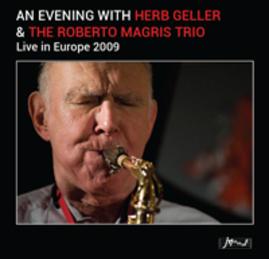 Here’s the evidence that at age 81, “young” Herb geller was still well in command of his jazz faculties, still able to find the Bop probity in lines like Zoot’s “Red Door,” as well as induce ample melodic warmth from liturgies (“Orson/ Upper Manhattan”) found in the Billy Strayhorn book of common prayer. Geller is well matched with Roberto Magris’ resourceful trio with whom he’s recorded  before ( 3/07, pg. 36) to excellent effect.  Magris, born in Trieste in 1959, is apparently a student of jazz literature and the history of modern jazz piano.  Geller was, indeed, fortunate to have found him just as we are lucky enough to hear them together again on this latter recording. At the NOVI Sad Festival in Serbia, Herb introduces Benny Carter’s “Lonely Woman” to his audience and takes the opportunity to recall aloud that it was Benny Carter, composer, song writer and multi instrumentalist, who inspired him to come a musician when he (Geller) age 14, first heard him.  Herb goes on to expound on the fact that both Ornette Coleman and Horace Silver have also written compositions titled “Lonely Woman ,” but that this one, Benny Carter’s, is the “real Lonely Woman”  In what turns out to be a rather expansive intro, Geller goes on to say that before he recorded the song ( it appears on his CD dedicated to Carter and Johnny Hodges, viz:  TO BENNY & JOHNNY -  HEP 2084), he talked to Benny who asked him to include the verse because nobody had ever done it before. Curiously, if Carter really thought that, he was not exactly correct.  June Christy sang the verse when she recorded the song with the Stan Kenton band in 1947 and when she recorded the song in 1955, again with Stan Kenton, on their very spare DUET album  (2/94, p. 30). Herewith, then, a bracing and well balanced hour of  jazz -a more than fitting finale to Herb Geller’s illustrious career, recorded some four scant years before he died on 12/19/2013.