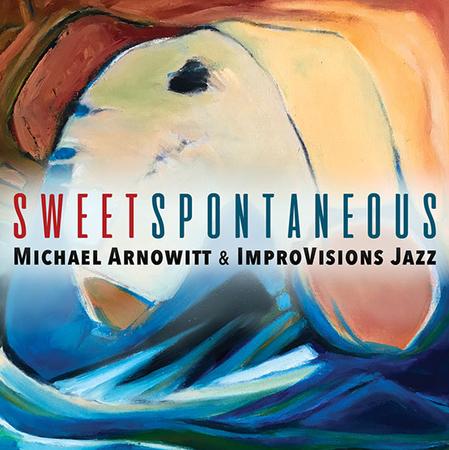 
So appropriate a jazz recording title is that of e.e. cummings’ poem, “O sweet spontaneous.” One wonders why it never received previous attention. But then, outside of English literature courses, who would be aware of a hundred-year-old poem that admires the earth’s annual rebirth and its firm resistance to human will? Michael Arnowitt knows of the poem. That’s not surprising. Like many other contemporary musicians, Arnowitt views jazz within the larger universe of artistic creation, including not only classical and folk music, but also literature, dance and visual art. Based in Montpelier, Vermont for 35 years, Arnowitt has been immersed in the artistic process, in international performances, and in studies of the personal musical development of master composers. In 2017, though, Arnowitt’s wide-ranging interests settled on recording his first commercially released jazz album. His past events have celebrated Ella Fitzgerald, Bill Evans, Art Blakey and other jazz icons. However, Sweetspontaneousconsists of his own compositions, and lyrics…though Arnowitt couldn’t resist the temptation to include poetry from Langston Hughes and Maya Angelou as well. Reflecting either his recent prolific creative activities or else the compilation of previously written pieces, Sweetspontaneousis notable for its scope of musical interests, its generosity toward participating musicians, its diversity of genres, and the directness of its accessibility for listeners. Indeed, Arnowitt, though residing until 2017 in New England and now in Toronto, included in Sweetspontaneoussome of New York’s equally talented and individualistic musicians, such as Yosvany Terry and Colin Stranahan. Space limitations prevent descriptions of all of the album’s delights. However, “Bulgarian Hoedown” stands out as a showcase for Arnowitt’s broad musical interests; the musicians’ locked-in engagement in performing his compositions; and the group’s interactivity for achieving a sound bigger than the number of its members. Remaining in the rhythmic and harmonic background, as if admiring his creation, Arnowitt allows violinist Al Roman to set “Bulgarian Hoedown’s” mood with a tug-at-the-heartstrings, darkly evocative, rubato solo. But that’s not the mood that develops. After Stranahan introduces a faster rhythm and after the horns build minor-key harmony in layers, Roman recalls country fiddling before trumpeters Dave Smith and Tatum Greenblatt take off with searing, soaring, swinging solos. The application of solos to consistent, insistent Bulgarian-inspired accenting builds throughout eleven minutes to a wild and thrilling conclusion. “Shapka Swing” too derives from Bulgarian culture, this time as musical descriptions of the country’s geometrically arranged hat designs. Arnowitt’s idea this time is the performance of consecutive duo performances, one player holding the pedal point and the other improvising over the pulsating rhythm. This allows for trumpeted fanfare, clarinet-and-violin klezmer allusions and unfolding trombone colors. Another work of global references, “Syria-us,” results from Arnowitt’s benefit concert to assist Syrian refugees. His absorption of, and respect for, divergent musical styles set up a work of Syrian harmonies, again in a minor key. At the beginning, the musicians breathe the notes and their microtones emerge as sonic utterances, instead of as melody. Once again, it becomes evident that all of the musicians are entirely devoted to Arnowitt’s project as they immerse themselves in his ideas. Arnowitt’s piano technique shines through on those tracks as he improvises in rotation with the other members of the group. His “Migratory Mood,” an imitation of birds in flight, achieves its culmination from Arnowitt’s introductory lightness of coruscating touch before he takes the piece into swing with the force of Rick Rosato’s bass work and the piano’s thematic fills. More delicate with classical leanings, and a departure from the horns’ harmonic accents, is the “Pirouette” waltz, performed on oboe by Randall Wolfgang. Not as simple as it would seem, Arnowitt’s idea brings to life repeated descending bass lines without resolution until the final phrase, thereby keeping the piece aloft, and the listener in suspense. Arnowitt’s integration of poetry into the music occurs when Langston Hughes’ “Crossing” and Maya Angelou’s “Still I Rise,” recited by assistant producer Therisa Rogers, are set to music. “The Crossing” features Rogers’ understanding of the poem itself as she is accompanied solely by Rosato. A beautiful ballad, Arnowitt’s “The Crossing,” with a slight tango feel, allows for extended improvisations as elaborations of the poem. Arnowitt’s composition based on “Still I Rise,” “Ascent” starts with Rogers’ recitation accompanied this time solely by Smith’s trumpet. A message of defiance and hope, “Ascent” moves at a faster tempo than “The Crossing.” “Ascent” also contains more intimations of joy suggested by Arnowitt’s written accents—a stylistic characteristic that occurs on many of his tracks. Arnowitt wrote some of his own poems, like “Against the Wind,” sung by Shirley Crabbe. It too expresses defiance through microtonal colors and the discomfort of dissonance. “The Crying Candle” is a message of optimism that offers a balm for the often negative environment of current events. Arnowitt, like Lennon and McCartney, imagines a future of, well, harmony, a product of spring’s rebirth.  Arnowitt is a musician with boundless musical curiosity. An example was his “1911 Concert,” which featured as a contrast of styles music written in that critical year by Maurice Ravel, Arnold Schoenberg, Sergei Rachmaninoff, Charles Ives, Igor Stravinsky Alexander Scriabin and Béla Bartók. Michael Arnowitt’s abundance of restless talent suggests that two discs could hardly contain it, and that he had to cull additional material from the project. Perhaps much more remains unrecorded. The prodigious result, Sweetspontaneous, is a rewarding accomplishment deserving of broad attention.